Because every comic needs a gay guy. 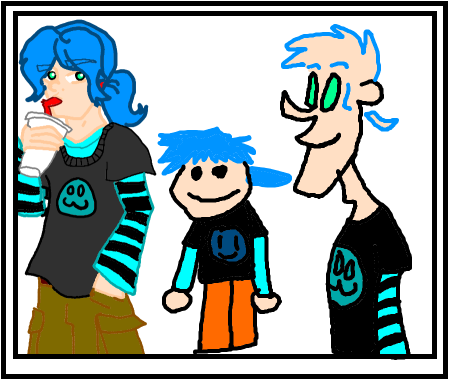 Orpheus! Me! Woo! Alright that's enough excitement for now. Calm down.
I'm a goof off with a heart of gold. I'm pretty much the best part of the site.
Not to be that guy, but I'm pretty amazing. I mean, my drawings are pretty much
the definition of doodles, right? Right! Which is why it's my little smiley design on the store's
thongs for sale and not Zelda's skull or Nate's.... goatee or something.

Despite what you may believe, I'm actually not a fluttery lispy fashion diva who loves trying on shoes.
I love watching classic horror movies, my favorites being the original Friday the 13th and Nightmare on Elm Street, and Rosemary's Baby.
But my all time favorite film? Definitely The Descent!

Oh! And if I was to compare my life to that of a pimp, Animal Crossing would be my crack, Mountain Dew would
be my golden fillings, and Nate would be my bitch. >:3
When it comes to laziness, Zelda and I are about even on that score. If there is ever a single chance where
I can avoid doing homework, or just work in general, I will leap at it. Typing this made me bored and tired.

But it's so tiny and dissapointing... {:3
Oh well, there are like, three drawings of me on this page.
It'll keep you readers busy for a few hours looking at my beauty.


Doodle Diaries is hosted by Keenspace, a free hosting service for webcomics..well it was called keenspace but now it's called Comicgenesis.
Though I guess it's also called stripspace too. But it's commonly refered to as comicgen.
I wish I had that many nicknames. All I got is Nate, which is my ACTUAL NAME. Zelda never told me we were supposed to give ourselves cool fake names.
Sad days...