Can be easily summarized as: The girl. 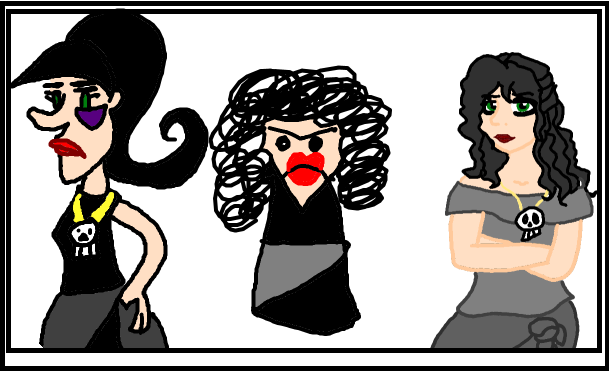 Hey there. It's me.
Soo...yeah. I'm the more artsyish one of the three of us.
And as you can see, my drawings are pretty awful, for that, I apologise.
I've wanted to have my own webcomic ever since I discovered they existed.
But the problem all this time was a combination of laziness, lack of creativity, and inability to use html.
Luckily, I captured Nate and forced him into eternal slavery forever maintaining our site.

I think it would be the coolest thing ever to live in the technodrome, aw man, do you
remember the technodrome? That thing was so cool. I mean, look at that thing!
Hm.. what? Oh yeah..My passions in life involve finding new ways to avoid going outside,
watching shows like Wonderfalls, dead like me, Clone High, Undergrads, and
any other shows cancelled before it's prime, as well as knitting skull keychains.

I dislike the idea of settling down in a simple suburban town, and dream about
moving to the city. Because no matter how much we may deny it,
every girl wants to grow up to be just like Carrie Bradshaw.
I am a born loser, and will constantly strive to get by through doing as little as possible.
Laziness for the win, bitches.


Doodle Diaries is hosted by Keenspace, a free hosting service for webcomics..well it was called keenspace but now it's called Comicgenesis.
Though I guess it's also called stripspace too. But it's commonly refered to as comicgen.
I wish I had that many nicknames. All I got is Nate, which is my ACTUAL NAME. Zelda never told me we were supposed to give ourselves cool fake names.
Sad days...